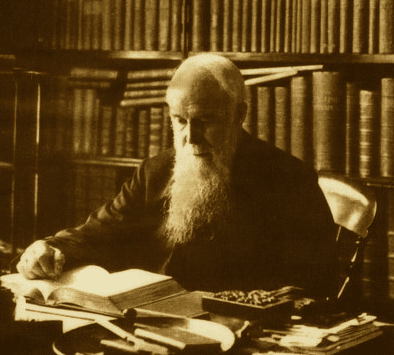 John Charles Ryle was born May 10, 1816, in Macclesfield, Cheshire, England. His parents were wealthy, but unspiritual.

He attended Eton, a very prestigious private school, and Oxford, where he excelled and was one of the top students in his class.

At age twenty-one, in his final year at university, he became a Christian due to a severe illness which confined him to his bed (he wrote, “That was the time when I distinctly remember I began to read my Bible and began to pray”); a new Gospel ministry which opened up in his home town; and some good evangelical books he was able to read.

At age twenty-five, his father’s bankruptcy caused the family to traumatically lose everything and Ryle, who had been working in his father’s bank, became a clergyman because he saw no other course for himself.

Ryle wrote of that time, “Every single acre and penny my father possessed had to be given up to meet the demand of the creditors… We got up one summer’s morning with all the world before us as usual, and went to bed that same night completely and entirely ruined.”

He also wrote, “If… I had never been ruined, my life of course would have been a very different one. I should have probably gone into Parliament… I should never have been a clergyman, never have preached, written a tract or a book.”

He started at a very small place and was a rural pastor for a number of years before becoming more and more substantial and influential.

He was a very powerful speaker and in much demand. Large crowds would come to hear him preach.

The result of his ministry was that some people started to really grow spiritually and other people thought he was too direct, outspoken, and sometimes a little bit too brusque and rude.

He was a man who had strong convictions and didn’t fear anyone. He would speak the truth and his ministry really flourished.

In 1880, he was made the Bishop of Liverpool (a teeming, important port city for that part of England). Many of the people there were very poor and he began ministering to the common people there.

As the bishop, he had charge over all the clergy in that city, but his example and emphasis was on Gospel ministry to the everyday, common, ordinary people of Liverpool.

The people responded, loved him dearly, and knew that he cared for them.

In 1900, when he died, these common, ordinary people flooded to his funeral. He had been their spiritual father and had helped them in so many ways. He wasn’t just about preaching doctrine; he was about caring for everyday people and their ordinary lives.

After he died, he was pretty quickly forgotten and, for about fifty years, he was an unknown person.

As people began reading his works, they found that they were some of the best theological writing that had happened in the last two hundred years.

Ryle was quite an author in his day and had a fairly active writing ministry. Not only did he write books, but he also wrote hundreds of tracks (booklets) on all kinds of spiritual issues.

His tracks have been reproduced and thousands have been sold and circulated. They have even been translated into many different languages, including Chinese and Hindustani. His influence has gone all over the world.

He was a very gifted writer and had the ability to clearly write truth in a way that engages the heart and mind, without needing a PhD to understand it.

He was a man who stood for the truth, without flinching, and took a fair amount of abuse for it and who, to some extent, was sidelined and bypassed in his own generation.

Catch the rest of this interview with Brian De Jonge on J. C. Ryle on VCY.tv