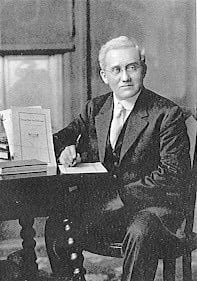 Through some financial reverses and some tough times, Frederick Lehman found himself working in a produce packing plant.

This was obviously not a very conducive environment for writing a Gospel song, but, the day before, Lehman had been at church and the pastor had preached such a wonderful message on the love of God that it really impacted him.

Throughout this particular day, God was working in his heart and he started jotting down some ideas that would eventually turn into a song.

Working with those crates in the packing plant, pieces of wood would break off so he would grab a piece, write down an idea, and put it in his pocket.

At the end of the day, he went home to his organ and started composing verses to a song from all those little pieces of wood.

He then remembered a wonderful poem he had been given years before about the love of God. He had kept the poem on a card, which he used as a bookmark, so he found it and started filling in his composition. It fit wonderfully and the meter was perfect!

When he got to the bottom of the card, it said, “These words were found written on a cell wall in a prison some two hundred years ago…”

That poem had actually been written around the year 1000 AD by a Jewish rabbi who had not accepted Christ as Messiah, but was able to graphically portray what the love of God was all about.

Later, a prisoner had written the words on his cell wall.

After the prisoner died, a man went in to repaint the cell, found the writing, realized it was something special, jotted it down, and preserved it.

Catch the rest of this interview with Dr. David Smith on Hymn Stories on VCY.tv