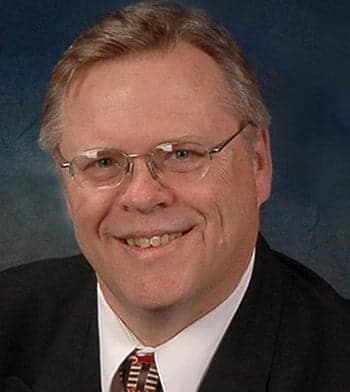 Dr. James Beller is the author of the book, America in Crimson Red, which takes a look at some of the lesser-known figures in American history and the Christians who, many of them, sacrificed their lives to ensure that we would have the religious freedom that we take for granted today.

Beller was born into a Catholic family and grew up in St. Louis, Missouri.

One day, when he was seventeen and living with his family in Arnold, Missouri, he went out to the car to help his mom carry in their weekly groceries.

He opened the door and saw a little pamphlet laying on the seat. It was called This Was Your Life.

After he brought in the groceries, he went up to his room and intently read through it.

He really took it all in until he got to the end and it showed an angel throwing the man into hell because he hadn’t trusted Christ.

He didn’t think God would do that and thought the tract must not be true so he ripped it up and threw it in the trash.

The following week, when he went out to help carry in the groceries again, he opened the door and there was another This Was Your Life track.

Again, he went up to his room and read it. He kept rereading it and rereading it for days until he finally decided to trust Christ as his Savior.

Right away, he realized that the Catholic church hadn’t taught him this and that he needed to find a different church.

He was on a quest and tried many, many different places, but it wasn’t until his friend invited him to a tent revival that he was able to find a place that taught the truth.

He went on to attend a Baptist college, which is where he met his wife, Vickie, and started pastoring in Arnold, Missouri.

After going on a Baptist history tour and learning about some of the Baptist forefathers, it touched his heart and, even though he never started out to be an author, the Lord really put it on his heart to write a book on the subject.

He began to do a lot of in-depth research and even traveled to Europe a couple of times in order to understand it better.

He wanted to make sure he got original sources and that everything was documented extremely well.

In 2014, Beller went home to Heaven, but his book continues to be an incredible resource and continues to have an impact on those who read it.

Catch the rest of this interview with Vickie Beller on America in Crimson Red on VCY.tv