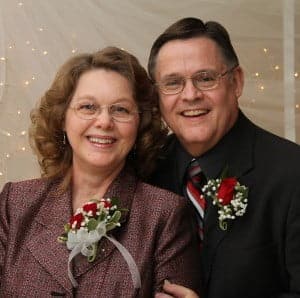 Ken Spilger is the senior pastor of Grace Baptist Church in St. Louis, MO. He is the only survivor of a plane crash and sustained third degree burns on about a third of his body.

Ken grew up in church, but it wasn’t until he graduated from high school that he became a Christian.

After graduating, he planned on becoming a farmer. He attended a local trade school and a Christian engineering technical school in Longview, Texas.

While there, he took Bible classes and got involved in a local church. In that ministry, God called him to preach so he transferred to Tennessee Temple University.

He began pastoring, graduated, and married his wife, Beth Brush.

He then went to work with his father-in-law, Burton Brush, a church planter in NE.

Two and a half years later, God called the Spilger family to Grace Baptist Church in St. Louis, MO.

A few years into pastoring, Ken had become very discouraged and realized he needed to get his priorities back in order. God was working on him and their family was looking forward to attending a pastors’ conference in Kansas City.

Their plans fell through, though, so they prayed about the situation and Ken wound up getting a call from a local pastor, whom he had yet to meet.

The pastor told him that he and some other pastors had rented a small plane and had an open seat. They were wondering if he’d like to fly with them.

Ken and Beth felt like it was God’s answer to their prayer so, in September, 1980, Ken said goodbye to his wife and their two little girls, met with the other pastors, and boarded the small plane.

Ken was really discouraged and didn’t know the other pastors he’d flown with so he kept to himself during the conference. He just listened and cried out to the Lord to speak to him.

At the end of the conference, they led in a prayer for all the pastors to commit themselves to the Lord. Ken prayed, “Lord, I’ve prayed this one hundred times and something isn’t right. I don’t have any idea what’s not right. I give myself to You to do whatever You have to do to make whatever is wrong right.”

On September 17, Ken and the other pastors boarded the plane to head back to St. Louis and, while approaching the airport, Ken could see the pilot was talking to the pastor sitting next to him. He called out, “Is everything all right?”

They looked back at him, nodded their heads “yes,” and he checked his seatbelt…

That was the last conscious memory he had of this near-death experience, but he had several impressions: The plane hitting the tree top… a flash of light and an explosion… a bone-jarring impact.

Later, they found out the plane had hit the tree top, fuel was spraying out, and they hit the power line which ignited on fire.

Ken was in shock at the time and, while he can’t clearly remember what happened, it appears that he found all the other men, propped them up on a limb, and went for help.

He had no idea where he was and, while walking, fell about forty feet down into a ravine, landing on a ledge.

When the fire department arrived, they heard him calling and crying out that there were others.

They brought him to the hospital for treatment, but none of the others made it alive.

The pain from the burns was unbelievable. He couldn’t comprehend how a person could be alive and conscious and experienced that kind of pain.

Throughout the entire recovery process, God continued to work miracles and extend His grace: Beth was told Ken would not be able to walk without a brace on his left leg, but he’s never had to wear one; she was also told he would not be home for Christmas, but he was home for Thanksgiving; and, on the thirteenth anniversary of the plane crash, God blessed them with their sixth of seven children, Stephen.

Catch the rest of this interview with Ken Spilger on Near Death Experience on VCY.tv