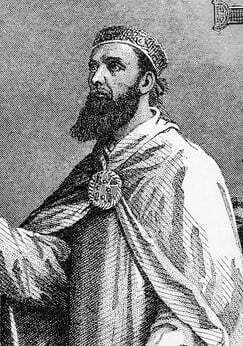 When you think of Patrick of Ireland, what’s the first thing that comes to mind? Leprechauns, shamrocks, the color green, the legends associated with this man?

Who was the real Patrick of Ireland and what did he do that garnered so much importance?

Patrick was born into a godly family around 360-387 AD in what is now Scotland, but was Britain at the time.

His family’s faith meant little to him and he was involved in some wicked things.

At age sixteen, he and several others were kidnapped and taken to Ireland by a group of pirates who sold him as a slave.

For six years, he suffered as a slave, but it was during this time that God got ahold of his heart and he trusted Christ as his Savior.

At the end of those years of servitude, it was as though God was telling him to go a certain direction and follow Him. He did and God led him to a boat, which was waiting for him. He was able to escape and return to his home.

Patrick wrote, “Again, I was in Britain with my parents, who received me as their son, and besought me to promise that, after the many afflictions I had endured, I would never leave them again. And then, truly, in the bosom of the night I saw a man as if coming from Ireland, whose name was Victoricus, with numerous letters, one of which he gave me, and I read the beginning of the epistle, containing the Voice of the Irish.

“And while I was reading the beginning of the epistle I thought in my mind that I heard the voice of those who were near the wood Focluti, which is near the western sea. And they shouted thus: ‘We beseech thee, holy youth, to come and live amongst us.’ And I was greatly pained in my heart, and could not read very much more; and thus I was proved. Thank God, that after many years the Lord performed to them according to their entreaty.”

The Lord was calling Patrick to go back to Ireland to preach the Gospel to the very people who had enslaved him!

Ireland was very heavily influenced by paganism at that time. There were wicked, wicked things going on there. It was a dark place of tribalism, war, suspicion, violence, and death.*

About one year after his arrival (405 AD), Patrick challenged the pagan gods during the Festival of Beltane.

There was a rule that, by evening, all lights had to be extinguished. No fire was to be lit until the royal fire had been lit.

Patrick and the group of people that were with him defied the pagan gods by building and lighting a huge bonfire at nightfall.

The penalty of lighting this fire was death and he was brought before the king; however, the king was intrigued by a man who was willing to risk so much just to show the strength of his God so he listened as Patrick witnessed to him.

This unlocked the door for Patrick to be able to travel all throughout Ireland. He won souls, baptized them by immersion, and gathered churches. By the time his years of ministry were finished, all Ireland was evangelized. Missionaries were even sent from Ireland to evangelize other countries, including Catholic Rome.

Because of the work God did through Patrick, the Golden Age of Ireland had begun.

Catch the rest of this interview with Jeremy Beller on American Baptist History on VCY.tv