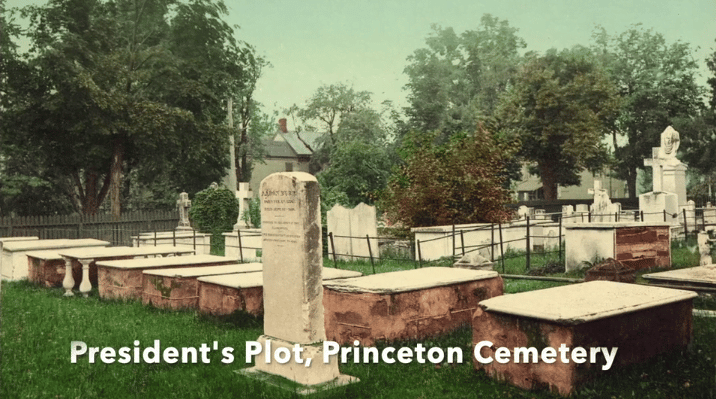 Princeton, originally called the College of New Jersey, is one of the oldest colleges in America.

It started out as a college to train preachers of the New Light Presbyterian School, those who were supportive of the revolutions going on in religion, the Great Awakening.

As you come into Princeton Cemetery’s Presidents Plot, you’ll notice some of the different markers:

Aaron Burr, whose father helped found Princeton, was involved in the duel with Alexander Hamilton.

Jonathan Edwards, third president of Princeton, preached that famous sermon, “Sinners in the Hands of an Angry God,” during the Great Awakening.

At the end of his ministry, he was asked to be president of Princeton, but died after just a couple months of service.

Samuel Davies, fourth president of Princeton, came down from New Jersey to Virginia as one of the first non-Anglican preachers to be licensed. He pled the rights of English freemen to be licensed and preached in “reading houses.”

At one of these reading houses, a young boy came with his mother and heard Samuel Davies preach. His name was Patrick Henry.

The influence of the academic leaders of America, those who founded these founding colleges, were men who wanted to train ministers to take the Word of God throughout this country.

Catch the rest of this talk with Randy Melchert on America’s Founding Pastors on VCY.tv

What Is Revival? – Part I