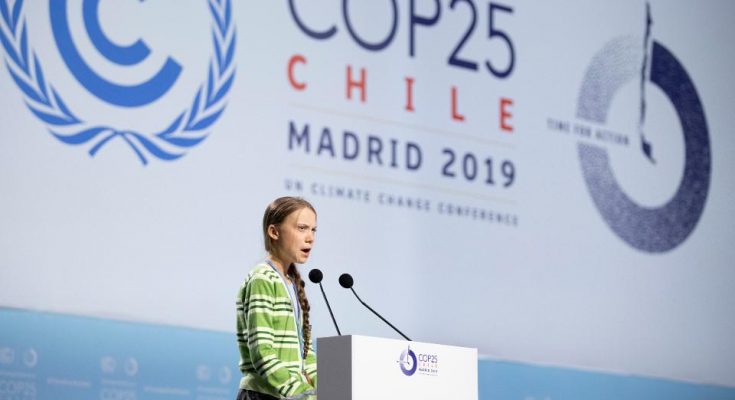 The U.N. Climate Change Conference (COP 25) is taking place in Madrid, Spain.  It’s a followup to the implementation of the Paris Climate Change Accord. Last Thursday there was a protest in London in which The Western Journal reported that actress Emma Thompson cited the possibility of eating pets due to the impacts of climate change.  Warnings are being given about ice caps melting at a rapid rate, sea levels rising and ocean acidification threatening all marine life.

Joining Jim with details on the conference was Alex Newman.  Alex is an international freelance journalist, author, educator and consultant.  His articles frequently appear in The New American. He also writes for Freedom Project Media.  Alex is co-author of the book, ‘Crimes of the Educators.’

Politicians and activists from all over the world have significantly increased their carbon footprint by flying in for the conference, while at the same time warning about the impact of carbon emissions.

With an attendance of about 25,000, you’d think they’d see the carbon footprint hypocrisy just in regard to the flights coming in and at least consider video conferencing.  After all, they’re meeting because they see carbon dioxide as a dangerous, toxic pollution that’s on its way to cooking the planet if we don’t reduce its presence.

Specifically, this conference is seeking to move forward on the Paris Climate Agreement.  While there are some ‘pet’ issues that some will have, there are other issues that headline the priority list.

One is the global carbon market.  Under this idea a price/tax would be put on carbon emissions.  Alex believes that if the U.N. succeeds at developing a system where people have to pay for emitting carbon dioxide, there’s nothing you can do that would be outside the taxation authority of the U.N.

There’s a lot of information packed into this edition of Crosstalk.  Here’s just a sample of other points discussed relative to this issue:

–What’s the status of the U.S. in relation to the Paris Climate Agreement?

–Are we seeing high-pressure, scare tactic-type language being used to communicate this alleged problem?

–Who’s Greta Thunberg and what’s her place in the overall climate change discussion?

–Does the success of the climate change movement actually require keeping some people in poverty?

–Why do climate change proponents see gender and patriarchy as topics intertwined with their cause?