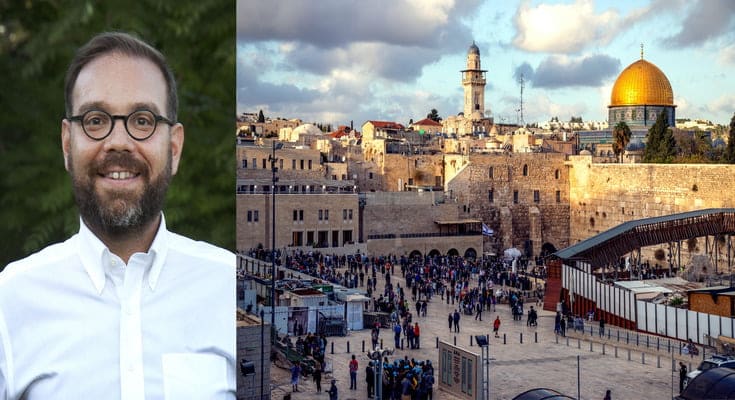 There are those who to this day deny the existence of Israel with both Jews and Arabs claiming divine legal and historic rights to the land.  While the debate has continued, we’ve seen some map makers refusing to label Israel, Iran has pledged to wipe Israel off the face of the earth and the U.N. has issued more resolutions against Israel than any other nation.

So the question remains.  Israel: Whose land is it anyway?

Chris believes this debate goes back to early biblical times, specifically when God promised the land to Abraham in Genesis 12.  He noted that even the prophet Joel talks about the idea of nations that have the desire to divide up God’s land.

As the conversation progressed, Jim had Chris comment concerning the following:

–Israel claims to have the divine deed to the land.  Chris noted Genesis 15 where  Abraham enters the land but realizes he’s missing descendants.  This is where God undertakes an ancient ritual.  This takes the promise of chapter 12 and moves it to the level of a covenant.

–There are those who claim that Jesus fulfilled this and he is the true Israel and therefore he replaces ethnic Israel.  Did Jesus come to earth to become Israel or to become the King of Israel?  Chris explained that if you look at what the prophets promised leading up to Christ, such promises never involved eradicating Israel.  Instead, they always involved the restoration of Israel for the benefit  of all the nations of the world.

–What about those who believe national Israel has no future role in God’s plan?

–What about the Jews and their belief that they have historical ties to the land, that they’ve had a continuous presence in the land and have bought the land.  Is this correct?

There’s much more that Chris brings to the discussion and you can hear it all when you review this vital Crosstalk broadcast.

For a donation of any amount you may obtain a copy of the book, ‘Israel: Whose Land is it Anyway?’  Call Friends of Israel at 1-800-257-7843 (ask about a free subscription to ‘Israel My Glory’ magazine).