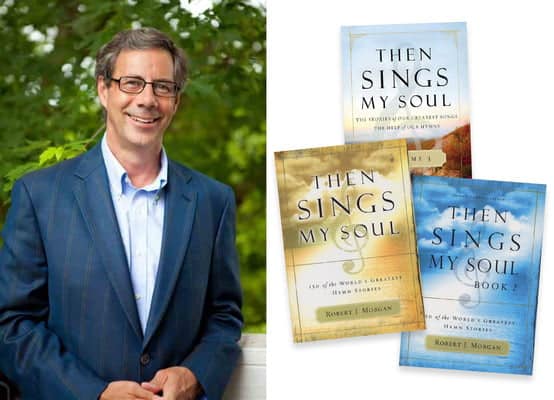 Robert Morgan is a writer, speaker and pastor.  He has more than 35 books in print with more than 4.5 million in circulation.  He’s been on Crosstalk before discussing ‘100 Bible Verses That Made America: Defining Moments That Shaped Our Enduring Foundation of Faith.’  He joined Jim to discuss his 3-volume set entitled, ‘Then Sings My Soul.’

According to Robert, hymns have been around for 3,400 years.  The first recorded hymn is from Exodus 15 when the Israelites had crossed the Red Sea.  Hymns continue throughout the Old Testament with some in the New Testament, including some that Robert believes were written by the apostle Paul.

After the biblical era ends, Christians began writing hymns, originally in Greek, followed by those in Latin.

Robert believes we need hymns, ‘circulating in our heads.’  He sees this as next in importance to meditating on God’s Word.

Are we in danger of losing the great hymns of the faith?  How does Robert view contemporary efforts to write worship music?  What hymns and their writers stood out on this broadcast?  These questions are answered, and other historical information is provided, as Robert reminds all of us about the importance of music that glorifies our gracious, loving and mighty God.

More InformationRobert has written this 3 volume set ‘Then Sings My Soul.’  Between the 3 volumes there are hundreds of hymns and their music score along with the story behind them.  You’ll learn about the hymn writers and the circumstances they were going through when a hymn was written.  These 3 books normally retail for $59.97, but this month our VCY Bookstore is celebrating their 24th Anniversary and during August they are offering this set at 45% off.  That’s just $33.00 plus any applicable tax or shipping.  They are available 24/7 at vcy.com or you may call the bookstore at 1-888-722-4829 M-F 10am-6pm or Sat from 10am-4pm Central.  This offer expires August 31, 2020.