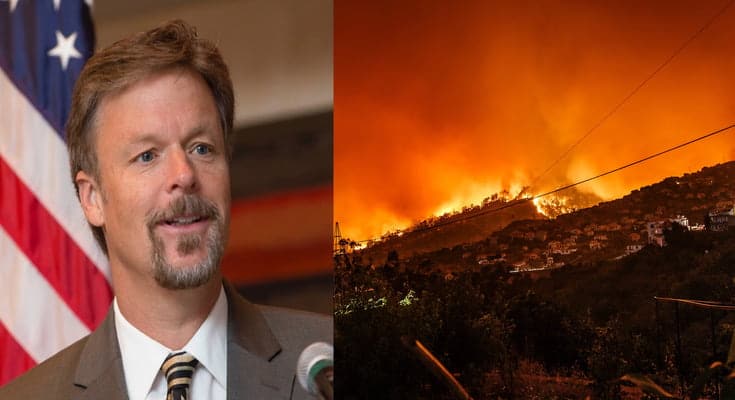 Day after day we’re told that the wildfires making the news in the U.S. are due to climate change and that President Trump is at fault for denying the science.

Joining Jim to discuss what lies behind this thought process was Craig Rucker.  Craig is the president and co-Founder of CFACT – Citizens for a Constructive Tomorrow.

Joe Biden held a special press conference to lay the blame for wildfires in California, Oregon and Washington, not on arsonists or natural causes, but on the idea that it was caused by our hair dryers, SUV’s and man-made emissions.  He went so far as to call President Trump a ‘climate arsonist’ for not taking action.

Craig noted that if you go back to the 1700’s and 1800’s, estimates are that in California there were about 4-5 million acres burned every year as a result of natural causes.  By comparison, this year’s burn involves about 2 million acres.

During the 40’s and ’50’s many of the fire prevention measures reduced those early amounts down into the range of a few hundred thousand acres.  That philosophy changed in the late 1900’s/early 2000’s.  They let nature ‘take its course’ so now it’s going back up to the point where it was before Columbus discovered America.

In the end, Craig believes climate change has little to do with this and that, ‘…most serious weather people would say that actually the temperatures in California are not going up in some sort of measured way.’  In fact, he communicated that according to data from NASA, the global wildfire rate has dropped about 25% since the 1950’s.

Listen to this broadcast and you’ll get a perspective on this issue you may not get elsewhere as Jim and Craig look at the term, ‘science deniers,’ the world hurricane situation, the implications of the election as it pertains to environmental issues, listener input and much more.