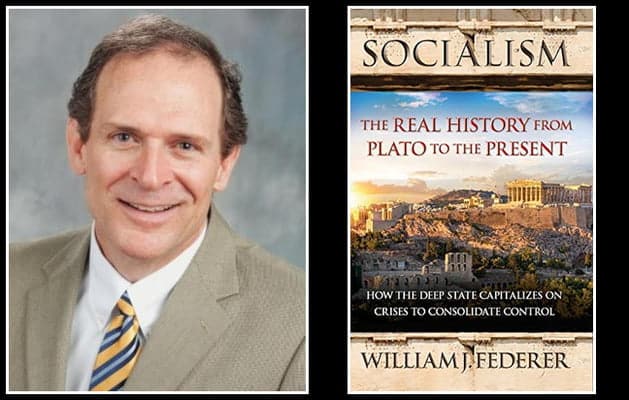 William Federer is a nationally known speaker, historian, author, and president of Amerisearch, Inc, a publishing company dedicated to researching America’s noble heritage.  He’s the speaker on The American Minute daily broadcast.  He has authored numerous books including, America’s God and Country Encyclopedia of Quotations,  Who is the King in America? and Socialism: The Real History From Plato to the Present in which he analyzes how the Deep State capitalizes on crises to consolidate control.

Cuba was once quite prosperous.  It was a Spanish possession.  We had done away with slavery in America but Cuba did not.  Next was the Spanish/American War through which we came to their rescue and the people of Cuba became free.

Eventually Cuba went from prosperous to corrupt.  Then came Fidel Castro who claimed he was going to bring hope and change (Same slogan used by President Obama.) as he gathered support against the corrupt Batista.  Raphael Cruz, the father of Ted Cruz, told William that as Castro was organizing these young people, he warned them of communist infiltration when in fact, Castro was initiating psychological projection where you look everywhere else except at the one who’s guilty.  In other words, Castro was the communist!

So whether it’s proletariat vs. the bourgeoisie (working class vs. business owners), whether it’s blacks against whites, Muslims against Christians, Catholics against Protestants or Hutus against the Tutsis; you break the nation down into these groups, call them victims and oppressors, orchestrate protests and riots to destabilize the country, and then in the panic you usurp power promising to fix the problem when in fact, all you’re doing is setting up a dictatorship.

Whenever you have a dictator or king you have a pyramid structure.  The leader is at the top.  Moving down from there is the deep-state ruling class that enforces the will of the dictator while everyone at the bottom is equal because everyone else has nothing.  This concept goes all the way back to Plato.

According to William, what we’re seeing now is the people of Cuba saying that they’ve had enough and want freedom.

Why is Black Lives Matter blaming the U.S. for the problems in Cuba?  Why has President Biden opened the floodgates at our border with Mexico and is lifting sanctions on the export of gas to Venezuela yet threatening Cubans bound for the U.S.?  What lessons should we draw from Cuba?  These are just a few of the questions William tackles on this edition of Crosstalk.

More Information
Socialism from Plato to the Present is available for a donation of $18.00 or more to Crosstalk.  It’s available at vcyamerica.org or by calling 1-800-729-9829.