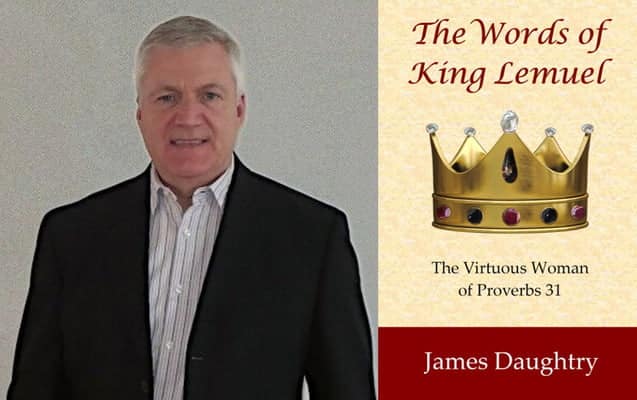 Who can find a virtuous woman?  For her price is far above rubies.  Many of you realize that these words come from Proverbs 31.  What about the description of that woman?  Is this just old and antiquated language or are their practical applications contained here for women of the 21st century?

To find the answer to that question, Jim interviewed James Daughtry.  James was born and raised in a religious home and attended church every Sunday.  In his senior year of high school, a coworker began talking to him about the Bible.  He started reading the Scriptures and started attending a Bible study and came to the realization he was a sinner in need of a Savior and trusted Christ as Savior.  He went to Bible college then went to Mexico as a missionary.  He has also served in the Caribbean and in Africa.  He has since worked in the business world and has been involved in a missions agency that focuses on unreached people.  He’s author of the book, When I Became a Man and also of the book discussed on this edition of Crosstalk, The Words of King Lemuel: The Virtuous Woman of Proverbs.

James began by addressing the misunderstanding surrounding this passage.  Often it’s thought of being just for women when the proverb is really for everyone.  In fact, the first character mentioned is a man, King Lemuel.  Nonetheless, this proverb often shows up in books by women for women that many times don’t get deep into the subject.

There’s a lot to unpack here as Jim has James comb through the details of this classic portion of Scripture.  For example:

This is just a small sample of what’s covered.  Hear the rest, and take in what listeners had to say as well, when you review this Crosstalk program.

The Words of King Lemuel: The Virtuous Woman of Proverbs 31

1 copy available for a donation of $11

5 copies available for a donation of $40

10 copies available for a donation of $69