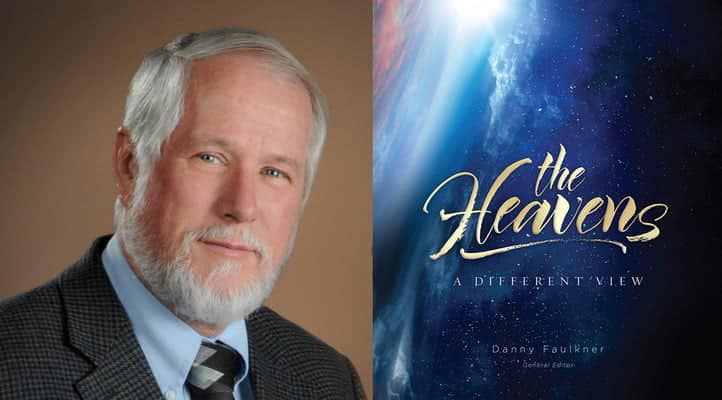 Areas of Scripture such as Jeremiah 32:17 and Psalm 8:3-4 show us that we should be in awe of the heaven and earth made by God’s great power, the same God that cares for you.

In order to focus in on the heavens, Crosstalk welcomed Dr. Danny Faulkner.  Dr. Faulkner has a Masters of Science in Physics, a Master of Arts and a PhD in Astronomy.  He taught at the University of South Carolina, Lancaster, for over 26 years.  He serves as editor of the Creation Research Quarterly and has published over 100 papers in various journals.  He’s a researcher, author and speaker for Answers in Genesis.  He is the author of numerous books including the newly released, The Heavens: A Different View.

Dr. Faulkner has always had a fascination with astronomy, but it wasn’t until his sophomore year in high school that he realized this was his calling in life.

What fascinates him the most?  He noted that sizes and the scale of the universe and that while we have a big, powerful universe, it requires a creator far larger and even more powerful to have created it.

So for Dr. Faulkner, astronomy is a special science.  He described it as “artsy” due to the fact that it was classified as one of the 7 liberal arts from classical antiquity through the Middle Ages.  It’s not an experimental science.  It’s observational as its beauty and wonder grabs at the hearts and minds of people more than any other branch of science.

As this program progressed, Jim had Dr. Faulkner deal with numerous questions including:

Numerous other questions were answered as well, many coming from listeners.  So get ready to learn some new things about astronomy and the heavens from a biblical perspective when you review this Crosstalk broadcast.

More Information
The newly released book, The Heavens: A Different View, is a beautiful hardcover 108-page book with brilliant photography of the heavens.  You’ll see star trails, the Milky Way from the Grand Canyon, multiple galaxies, the Pleiades, Orion, star clusters, the North American Nebula, several photos of the sun and moon, Jupiter, Saturn, comets and so much more.  This newly released hardcover book retails for $19.99.  Through January 31, the VCY Bookstore is offering this at 40% off, just $11.99 plus any applicable tax and shipping.  Go to vcy.com or call 1-888-722-4829.