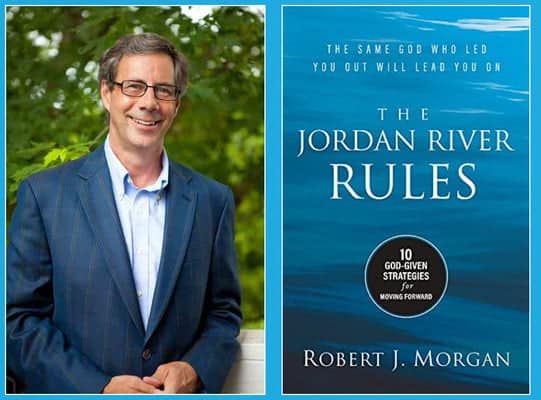 As we go through life there are many changes that impact us in a significant way. Whether it be leaving home, entering college, starting a new job, getting married, becoming parents, relocating, facing an illness, being hit with a crisis, or perhaps losing a loved one.  Under such circumstances, we often wonder how we will ever make it through.  At times it seems we’re just spinning our wheels and we may wonder if we’ll ever get past that point and be able to move on.  The guest on this edition of Crosstalk has written a book of encouragement to understand that the same God who led you out will lead you on.

Robert Morgan is a writer, speaker and pastor.  Jim interviewed him previously pertaining to his 3 volumes of Then Sings My Soul providing us hymn history. We’ve also interviewed him regarding his book, 100 Bible Verses That Made America: Defining Moments That Shaped Our Enduring Foundation of Faith.  He was with us with The Red Sea Rules and is back with The Jordan River Rules.

Many Crosstalk listeners are familiar with the story from Exodus where the Israelites were trapped by the Red Sea, unable to go forward or backward.  God came and led them through, giving them victory.  The principles extrapolated from that story were put by Robert into book form 21 years ago and it was called, The Red Sea Rules.

Robert’s son-in-law kept telling him that he needed to do a follow-up edition but he never had the passion for it.  Then Robert’s wife passed away and he began studying the book of Joshua and the parting of the Jordan River.  Just as this was a new stage in life for the Israelites, Robert realized he was entering a new stage as well and the result was the book featured on this broadcast.

The Jordan River Rules looks at numerous principles, supported by scriptural examples including:

There’s more to take in and you can hear it all when you review this encouragement-filled edition of Crosstalk.

More Information
Special Offer: This month the VCY Bookstore is featuring The Jordan River Rules as one of their featured books of the month.  This hard cover, hand-size book has recently been released at $17.99.  Through February 28, 2022, the VCY Bookstore is offering The Jordan River Rules at 50% off.  They have it at $8.99 plus any applicable tax and shipping.  It’s available at vcy.com or 1-888-722-4829.