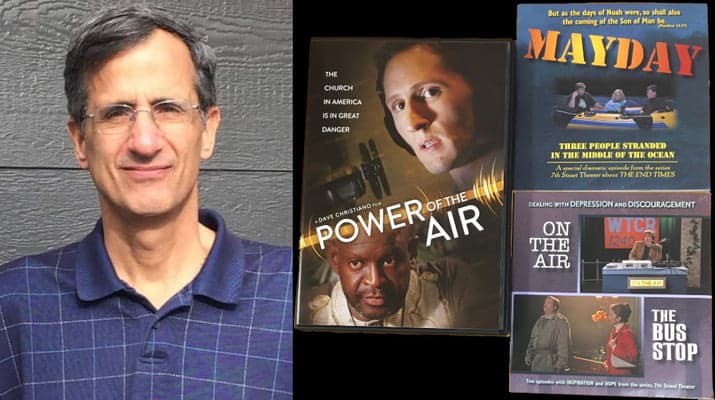 Dave Christiano is a Christian film director, producer, writer and distributor.  Dave at one time was destined for Hollywood with high hopes and big dreams.  God had a higher calling on his life to produce Christian films, which he’s been doing for over 35 years.

This edition of Crosstalk takes a look at 4 video evangelistic tools put forth by Dave.  As you listen, you can be sure there will be someone that will come to mind who can be touched by the situations involved and the messages of hope that are all based upon God’s Word.  For example:

7th Street Theatre is about 5 Christian actors that put on a weekend stage show for their community. Dave did 3 seasons as a writer and this gave him the opportunity to deal with numerous topics through various dramatic skits and routines that take place onstage.  Each 25 minute segment conveys a lesson or spiritual truth.  Episodes include:

Through March 31, 2022, Crosstalk is presenting a special offer featuring a set of the DVD’s which includes the 90 minute film, Power of the Air.  Also included are (3) episodes of 7th Street Theatre on two DVD’s which include, Mayday, Bus Stop and On the Air.  We’re offering this package as a set for a donation of just $20.00.  This includes shipping.  However, each additional set you request going to the same address is available for a donation of just $12.00 more.

2 sets are available for a donation of $32

Once again, these prices are only for orders being shipped to the same address.  You can order online right now at vcyamerica.org or 1-800-729-9829.  This is for a limited time.

This is for home use only.  These DVD’s cannot be used for church or group showings.