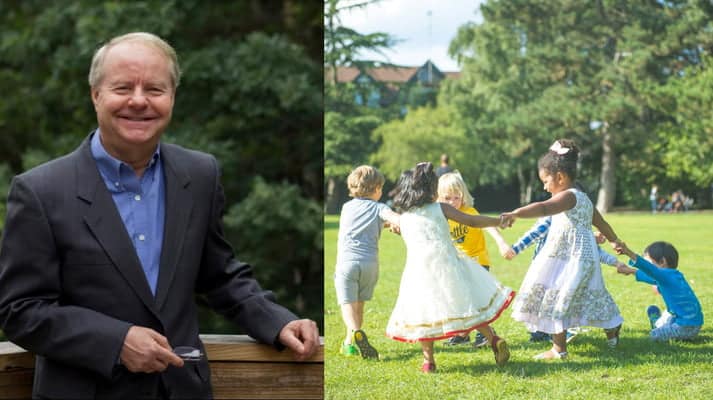 Children are under attack today and it’s coming on many fronts.  Just take a look at the goals of communism as read into the congressional record of 1963 and you’ll see goals such as the discrediting of the family, encouraging the raising of children away from the negative influence of parents, getting control of the schools and getting a hold on the media.

Who would have thought that in our day we’d actually see this war playing out right before our eyes.

Joining Jim to discuss this trend was Robert Knight.  Robert is a former Los Angeles Times news editor and writer and was a Media Fellow at the Hoover Institution at Stanford University.  He’s a regular weekly columnist for The Washington Times, Townhall.com, afa.net and others.  Robert has held senior positions in a number of pro-family organizations.  He has co-authored three books and written 10 others including, The Coming Communist Wave: What Happens If the Left Captures All Three Branches of Government and Liberty on the Brink: How the Left Plans to Steal Your Vote.

Discussion began concerning a bill by Florida Governor Ron DeSantis called the Parental Rights in Education Law.  This would ban classroom instruction by school personnel or third parties on sexual orientation and gender identity for children in K-3rd grade.  Disney is against this move to prevent the sexualization of children before the 3rd grade, while at the same time, the media has twisted this by calling the legislation a “Don’t say gay” bill.

Robert noted that when you sexualize children, there’s no other reason to do this than to be setting them up for molestation.  So while they talk about fairness and inclusion, they give away their ultimate goal.  Jim presented the example of  Dylan Pontiff, a drag queen, who testified before a committee concerning drag queen story hours.  Dylan referred to the “grooming of the next generation” in his testimony.

Robert went on to mention the Human Rights Campaign (HRC), the nation’s largest gay pressure group.  They turned down a 5 million dollar pledge from Disney and wouldn’t accept it until Disney would put real muscle into killing the Florida bill.  Robert believes, even though HRC denies it, that their end-game is the criminalization of Christianity.

There’s much more that’s covered on this issue, and you can hear it all, when you review this vital Crosstalk broadcast.