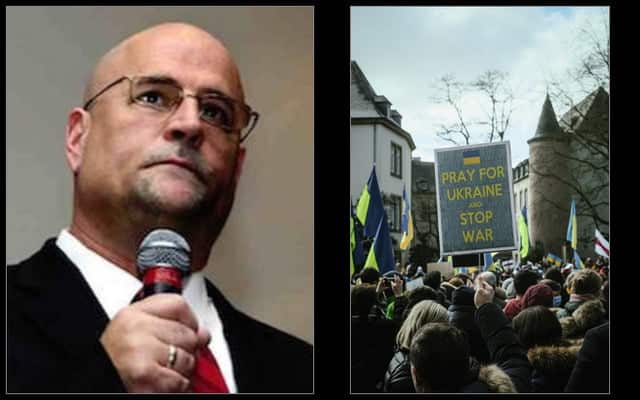 Jim Simpson is an investigative journalist, businessman and former economist and budget examiner for the White House Office of Management and Budget under Presidents Reagan, H.W. Bush and Clinton.  He’s an expert on immigration and refugee resettlement.  His articles have been published in Accuracy in Media, American Thinker, Breitbart, Daily Caller, Epoch Times, Washington Times, WND.com and elsewhere. He is author of several books including The Red-Green Axis 2.0: An Existential Threat to America and the World and his latest book, Who Was Karl Marx: The Men, The Motives, and the Menace Behind Today’s Rampaging American Left.

Most of us have a plethora of information that we can access concerning the war in Ukraine.  However, what are we to make of it?  Who’s telling the truth?  For example, according to Simpson, Ukraine claimed they killed 11,000 Russians within the first week or so of the fighting, while more recent reports put the figure at about 2,000.  He also has inside information claiming that there’s been at least an equal number of Ukrainians that have been killed.  This confusion should come as no surprise as Simpson noted that the Russians are masters at deception and propaganda and the Ukrainians aren’t far behind.

Is Putin seeking to restore the glory of the old Soviet Union?  Simpson believes this is both true and false.  While they do have every intention of doing that, he views the fall of the Soviet Union as having been a “false-flag” operation.  It was orchestrated from the top as it followed an ancient Chinese war philosophy that attempts to deny your enemy an enemy.  So when the Soviet Union and communism supposedly disappeared, our president and Congress tripped all over themselves to cut defense spending and declare America the victor over communism.  Meanwhile, the Russians were modernizing their missile fleet while at the same time claiming poverty!  The result?  Communism is spreading throughout Africa as well as South and Central America.

Much more is discussed concerning this issue including:

Get the answers to these questions, and find out how listeners feel, when you check out this edition of Crosstalk.