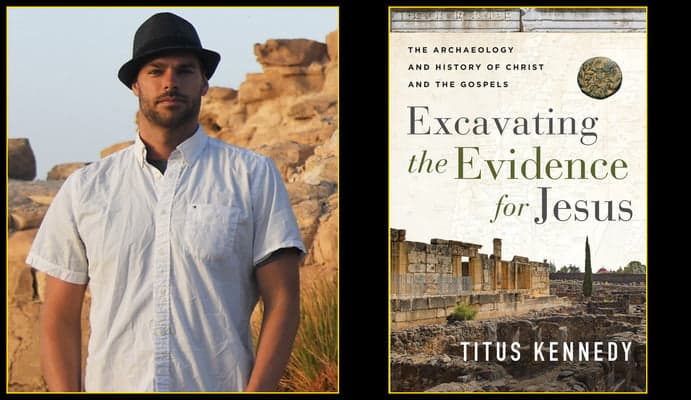 No other figure has impacted history like Jesus.  Yet today, he’s often seen as a mythical character whose legend increased over time.  So what does the historical and archaeological evidence say about Jesus?  The guest on this Crosstalk has investigated firsthand the discoveries connected to Jesus’ birth, ministry, crucifixion, burial and resurrection.  He’s visited and excavated where Jesus walked and examined the artifacts connected to Jesus’s life and presents an up-to-date and comprehensive overview of the research and findings that illuminate the historicity of Christ as presented by the Bible.

Dr. Titus Kennedy is a professional field archaeologist currently directing archaeological projects in Bible lands while researching, writing, and teaching in the field of biblical archaeology.  He’s a research fellow at Discovery Institute and has been a consultant, writer, and guide for history and archaeology documentaries and curricula.  He has authored, Unearthing the Bible and his latest book, Excavating the Evidence for Jesus.

Dr. Kennedy believes that the historicity of Jesus is under attack so much today because  he’s the central figure of the Bible and of Christianity, and in our culture, Christianity is not as widespread or popular as it used to be.

What’s ironic is that such attacks take place in a world where our calendar is based upon the existence of Christ.  So while newspaper articles, documentaries or high school classes may claim that there’s no evidence outside the Bible that Jesus existed, that’s not the viewpoint of professional scholars in the fields of archaeology or ancient history.

Helping to frame his position concerning the historicity of Christ, Dr. Kennedy mentions other figures that lived during Christ’s lifetime, including high profile political leaders such as Caesar Augustus, Quirinius and Herod.  Such individuals are attested to via ancient documents, coinage, statues and inscriptions, so there is no question as to their existence, position and place in time.

Other aspects of the discussion that point to the historicity of Christ that Dr. Kennedy comments on include:

These and other aspects of this topic are discussed, so get ready to have your faith strengthened from ancient history, on this edition of Crosstalk.

More Information
Special Offer: Excavating the Evidence for Jesus is one of the featured books of the month at the VCY Bookstore.  This newly released book of 298 pages retails for $24.99. Through March 31, 2022, the VCY Bookstore is offering this book at 52% off for $11.99 plus any applicable tax and/or shipping.  Available 24/7 at vcy.com or by calling during business hours at 1-888-722-4829.