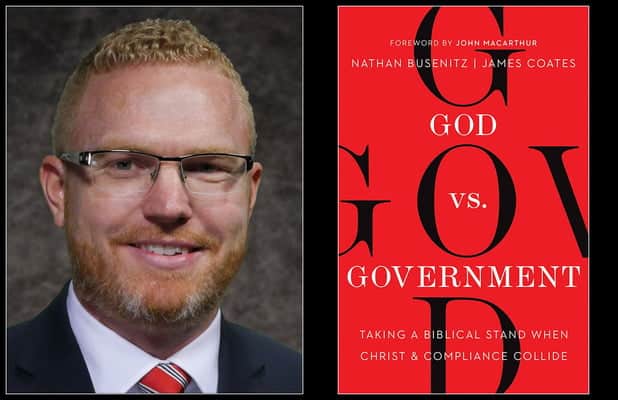 In the spring of 2020, government mandates forced churches across North America to close their doors in response to the COVID-19 pandemic.  As societal fear and unrest increased, Christians were forced to grapple with how God wanted them to respond to these state-imposed restrictions.  After all, didn’t the closure of churches pose a serious threat in a time when people needed spiritual direction more than ever?

These words are on the back cover of the book, God vs. Government which follows two churches’ decisions to reopen despite orders to remain closed.  The guest on this edition of Crosstalk led his congregation to return to in-person meetings and were swiftly met by governing authorities ready to shut them down again.  He was arrested and imprisoned for following Hebrews 10:25 which tells us not to forsake the assembling of ourselves together.

The lock-downs for Canada began in March of 2020.  Initially GraceLife Church did comply but did so reluctantly.  The health emergency ended in June of 2020.  He had preached a couple of sermons in preparation for that though at the end, there were still restrictions imposed on churches so they opted to open and leave it up to their congregants as to whether they wanted to attend.

A key function of the book is to answer what appears to be conflict between Romans 13 and Hebrews 10:25.  When they were wrestling with the restrictions, these texts were on their minds in terms of trying to come up with a proper response to the pandemic.  They felt that in light of their ignorance it would be wise to comply with authorities since no one knew how severe the pandemic would be.  So they began to live-stream services while data on the pandemic continued to come in.

As time went on, they felt that what they were seeing was government over-reach and overreaction as 14 days to “flatten the curve” became weeks and months. Pastor Coates also cited the effects of people being isolated from one another and not allowing the members of the body to come together.

Eventually GraceLife did reopen in defiance of the government and Pastor Coates was arrested.  How did this all play out?  What might this mean for the local church in the future?  Find out when you review this edition of Crosstalk or better yet, get the book.  It’s a featured book of the month at the VCY bookstore.  Details on how to obtain a copy are listed below.

God vs. Government: Taking a Biblical Stand When Christ & Compliance Collide is also one of the featured books of the month at the VCY Bookstore.  It retails for $17.99, but through the end of this month, March 31st, they are offering this book at 50% off.  That’s just $8.99 plus any applicable tax and/or shipping.  It’s available at vcy.com or 1-888-722-4829.  (If you get a busy signal, call back as they are open through 6pm Central today.)