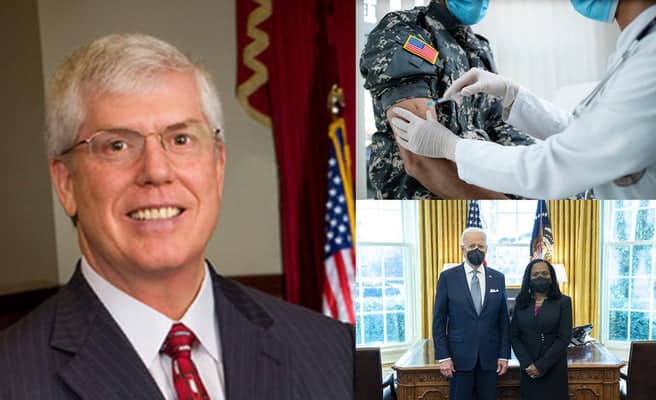 As COVID infections and hospitalizations continue on a downward trend, the mandates for receiving the vaccines continue to affect members of our military.

Returning to Crosstalk to address these issues was Mat Staver.  Matt is the founder & chairman of Liberty Counsel.  Mat is a constitutional attorney with hundreds of published legal opinions.  He has authored a number of scholarly law review publications and numerous books.  He’s filed numerous briefs and argued in many federal and state courts and before the U.S. Supreme Court.

While COVID mandates/the military and the Supreme Court were the main topics, Jim and Mat opened the program remembering Terri Schiavo who made national news when   on March 31 of 2005, her life was excruciatingly taken by means of starvation and dehydration in Florida.

On Monday the 4th, the Senate Judiciary Committee will convene and take up the nomination for Ketanji Brown Jackson who would be replacing the retiring Supreme Court Justice Stephen Breyer.

Jackson thus far has not been able to define what a woman is, she doesn’t know when life begins and she’s been lenient on child pornographers.  Mat believes she doesn’t deserve to be on the court as her judicial philosophy is not one of original intent but more related to activism.

The case of Navy Seal 1 v. Austin, deals with anyone in the various branches of the military that have submitted religious objection requests to the COVID vaccines mandates that have been imposed by President Biden and Secretary of Defense Lloyd Austin.

According to Mat, we now know that there are more people in the military that have died in one year (2021) from the COVID vaccine than have died in two years from COVID.

Liberty Counsel is seeking class action.  This means all persons in every branch of the military would have a similar injunction to protect them.  That injunction would include: (1) Not being forced to get the vaccine.  (2) You can’t be discharged because you’ve exercised your religious right not to get the vaccine.

Mat shared many more details, particularly in regard to the vaccine issue.  Learn more from this edition of Crosstalk.