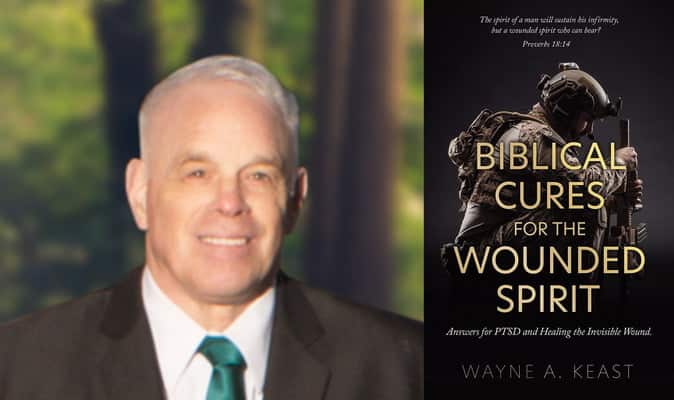 Proverbs 18:14 says, “The spirit of a man will sustain his infirmity; but a wounded spirit who can bear?”  This verse was the launching point for this broadcast as Jim mentioned the many military veterans who are committing suicide and how the percentage is far higher than for non-veterans.  One of the reasons for this is a subject Crosstalk dealt with here for the first time—Post Traumatic Stress Disorder (PTSD).

Appearing on Crosstalk to detail how he became involved in this issue was Wayne Keast.  Wayne is commissioned as a Chaplain in the U.S. Army and retired after 23 years of service.  He now serves with the Armed Forces Baptist Mission to help Wounded Warriors with PTSD to find Christ.  He’s the author of Biblical Cures for the Wounded Spirit: Answers for PTSD and Healing the Invisible Wound.

Wayne began by noting how he was the product of a broken home.  Looking for direction he entered the Army at age 18.  After 3 years as an enlisted soldier, he left the military for 4-1/2 years at which time he got married. Eventually he re-enlisted and was sent to Germany.  He finished college and seminary and the Army sent him off for training to be a chaplain. After a deployment and after his own surgery, he learned about war-time PTSD issues by listening to soldiers.  This led him to discover how psychology, drugs and New Age philosophy aren’t the answer.  Instead, he learned that this invisible wound can be treated successfully via the Word of God.

Don’t miss this edition of Crosstalk where you’ll learn:

You’ll also get an opportunity to hear how listeners responded to this crucial issue as well.