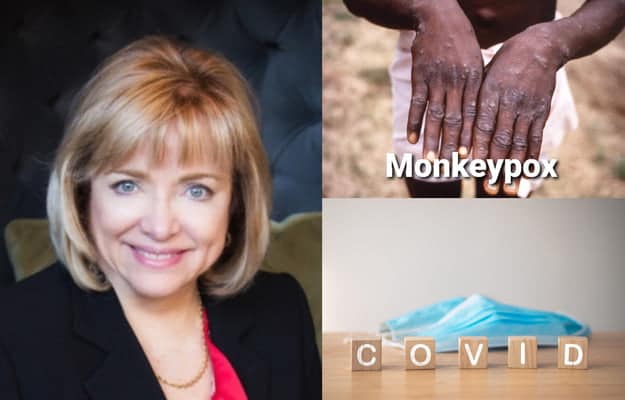 Jim began with details concerning a story that ran in The Gateway Pundit.

Back in November of 2021, the Nuclear Threat Initiative (NTI is a non-profit, non-partisan global security organization) focused on reducing nuclear and biological threats imperiling humanity.  They partnered with the Munich Security Conference to conduct a tabletop exercise that concerned reducing high-consequence biological threats.

On page 10 of the report, they discussed a possible monkeypox outbreak on May 15th of 2022 in the fictional country of Brinia.  This is interesting when you consider that the first case of monkeypox was reported around May 7th but by May 22 it was reported that 14 nations confirmed outbreaks.

Belgium was the first nation to introduce a compulsory monkeypox quarantine.  In other words, anyone testing positive would need to isolate for 21 days.  By May 26th at least 200 confirmed cases and over 100 suspected cases were detected in Europe, Australia and the U.S.

Then on May 20th, the Biden administration had ordered 13 million additional doses of the monkeypox vaccine.  He warned that monkeypox was something all of us should be concerned about.

Was the tabletop exercise and what followed a mere coincidence?

Returning to Crosstalk to provide answers was Barbara Loe Fisher.  Barbara is the president of the National Vaccine Information Center (NVIC), a non-profit charity she co-founded with parents of DPT vaccine injured children in 1982.  NVIC is a national, grassroots movement and public information campaign to institute vaccine safety reforms and informed consent protections in the public health system. She has researched, analyzed and publicly articulated the major issues involving the science, policy, law, ethics and politics of vaccination to become one of the world’s leading non-medical, consumer advocacy experts on the subject.

According to Barbara, one of the reasons people are talking about monkeypox is because there are rumors that it has been genetically altered in bio-hazard labs in China and elsewhere.  Health officials deny this and they point to the genetic sequences of the current strain that link this disease to past outbreaks.  However, we all know about the controversy surrounding the origins of SARS CoV-V2 and that it was potentially genetically engineered in Wuhan, China.

Barbara reported that currently there are about 600 cases of monkeypox reported in 30 countries.  About 18 of those are in the U.S.

Monkeypox is an orthopox virus like smallpox.  It causes open lesions and blisters on the skin.  It can be transmitted through close, personal contact with open lesions or body fluids.  The symptoms are milder than smallpox and it can be mistaken for chickenpox, shingles or other diseases that cause skin lesions.  There have been no reported deaths in the latest outbreak.

As this program moved along, Barbara shared more on what she knows about this strange new disease.  Discussion then moved to the World Health Organization and how they might affect U.S. health policies, the latest on the COVID shots, why have approximately 10,000 adverse events been removed from the Vaccine Adverse Event Reporting System (VAERS), input from callers and much more.