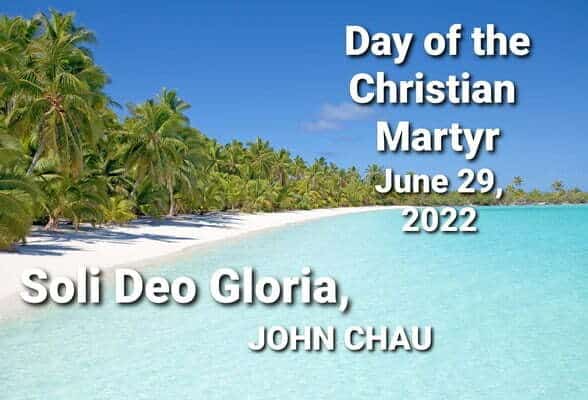 Todd Nettleton is the Chief of Media Relations and Message Integration for the Voice of the Martyrs-USA and is also the host of The Voice of the Martyrs Radio. He serves as a voice for persecuted Christians, inspiring Christians with the faithfulness of Christ’s followers in over 70 nations where they face persecution for being a follower of Jesus Christ.  Todd is author of Forbidden: 40 Days on the Frontlines with Persecuted Christians.

What is the significance of June 29th?  Todd indicated that according to church history it’s the day that the apostle Paul was beheaded outside Rome.  For those at the Voice of the Martyrs it’s a day to think about those who’ve sacrificed their lives for the cause of Christ and to get us to think what it’s worth to see the advance of the Gospel.  What would you be willing to give up to see that happen?

This year, Voice of the Martyrs is retelling the story of John Chau.  John was a young man who was called by God as a teenager to go to North Sentinel Island which he eventually did in 2018.  This is an island outside of India known as the forbidden island.  John went there to get acquainted with the Sentinelese people who had been completely unreached.

John was “all in” concerning this effort.  For example, through college he took cold showers because he knew there would be no hot water on the island.  He got lasik surgery on his eyes because he knew he wouldn’t be able to properly take care of contact lenses.  He received linguistics training as well as becoming certified as an EMT to hopefully serve the people medically.  These examples show that for John, every decision was part of his focus toward being obedient to God’s call to reach the people of the island.

John had a “Plan A” and a “Plan B”.  What were those plans and what did this attempt cost him?  Review this broadcast to find out and then consider what the Lord may be calling you to do to help spread the Gospel of Christ.

This Crosstalk also included discussion concerning Christian persecution in Nigeria, Eritrea and Vietnam, along with good news concerning the conversion of an Imam in Bangladesh.