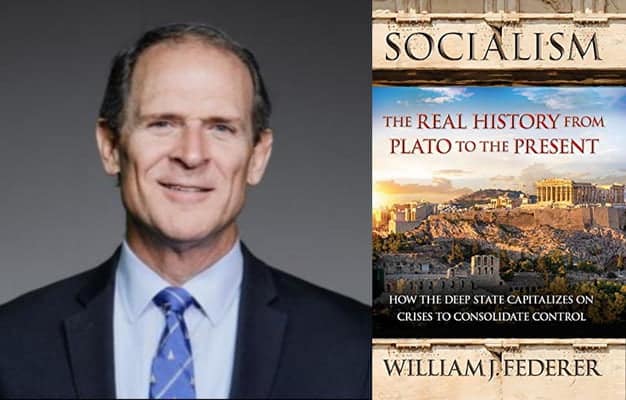 William Federer is a nationally known speaker, historian, author, and president of Amerisearch, Inc. He is the speaker on The American Minute daily broadcast. He has authored numerous books including, America’s God and Country Encyclopedia of Quotations, Who is the King in America?, and Socialism: The Real History From Plato to the Present. It has the subtitle How the Deep State Capitalizes on Crises to Consolidate Control.

The nation continues to reel from the FBI’s raid upon the home of former President Donald Trump in Mar-a-Lago. It’s been called an unprecedented action. The FBI Director Christopher Wray and the U.S. Attorney General Merrick Garland publicly acknowledged their approval of the filing of the search warrant application. President Biden denies having any advanced notice of the raid. Kevin McCarthy, the House Minority Leader, stated, “The Department of Justice has reached an intolerable state of weaponized politicization.” He also stated, “Attorney General Garland, preserve your documents and clear your calendar.”

The Russian Collusion Hoax failed, the attempts to remove Donald Trump from office by impeachment failed not once but twice, and some are viewing this as an attempt to disqualify him from office again. Some have accused him of espionage, some have called for him to be imprisoned, and others have hinted at even harsher penalties. Marco Rubio is warning that those who are supportive of President Trump could be next.

While such actions may be unprecedented in America, they are not unprecedented in the world. But where has this happened before? Has our nation been lost as a constitutional republic? Do you remember how Benjamin Franklin responded when asked if we had a republic or a monarchy? He replied, “A republic if you can keep it.” How stunning to hear Governor DeSantis of Florida say the scene of this raid at Mar-a-Lago was akin to one in a “banana republic.” U.S. Senator Rick Scott said the raid was “third world country stuff.”