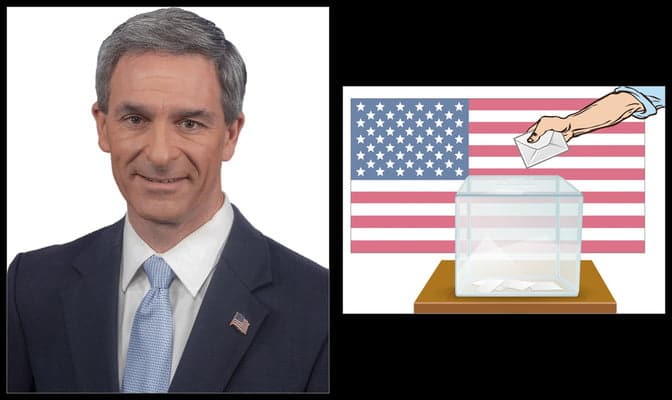 Ken Cuccinelli is the national chairman of the Election Transparency Initiative.  He previously was the acting director of the U.S. Citizenship and Immigration Services and then as the acting deputy secretary for the Department of Homeland Security.  He was a leading spokesman for the administration on immigration, election security and homeland security issues.  He served in state government in the Virginia Senate from 2002-2010 and as Virginia’s attorney general from 2010-2014.

Ken was asked by Jim that if he could give a letter grade to the issue of election security and integrity in America, what would that grade be?  He said he’d give a C or possibly a C+ in some parts of the country.  Then again, he noted that he’d give some parts of the nation less than a C as well.

He explained his answer based upon the following: There are 51 election systems in our country.  Of course these are broken down by states and has been this way since the Constitution was ratified.  There have been some exceptions that include the appropriate implementation of civil rights in states where blacks were denied the opportunity to vote.

This works to our advantage in terms of election security where someone from the outside might attempt election tampering.  If there’s an effort to hack one state, then they’ve hacked one state.  So if the efforts to nationalize our elections were to happen, you immediately lose that insulation that comes from having the diversification via 51 different election systems.  In other words, under a monolithic, nationalized system, if an enemy hacks that system, they’ve hacked the whole thing.

Ken explained that election systems have been largely ignored in state legislatures for many years.  Now we’re seeing an intense interest in these systems following the 2020 election because we had an unusual number of failures, problems and varying degrees of fraud, all which undermines confidence in our election system.

Ken also commented on the following points related to this issue:

Crosstalk listeners from across the nation closed out this informative broadcast with their comments.