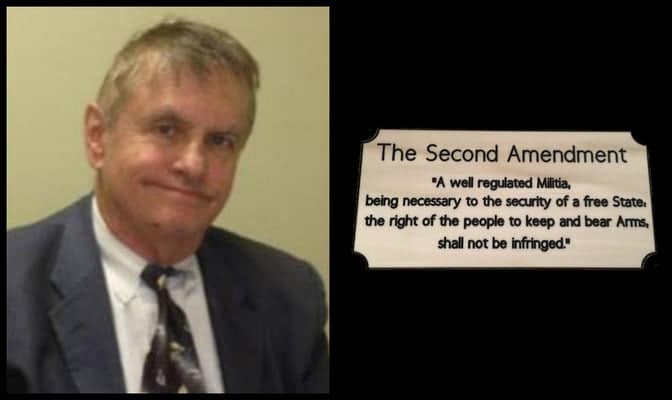 On January 20th, 2021, as the nation looked on, Joe Biden place his hand on the Bible and took the oath of office to become president of the United States.  It was to preserve, protect and defend the Constitution of our nation.

In that Constitution is something called The Bill of Rights.  Part of that is the  2nd Amendment that courts have previously affirmed.  In other words, the right of the people to keep and bear arms shall not be infringed.  Sadly, this individual right is under attack…from our president!

Returning to Crosstalk with the latest news concerning 2nd Amendment issues was Mike Hammond.  Mike is the legislative counsel for Gun Owners of America.

President Biden views gun violence as a public health epidemic.  He wants to:

–Ban the manufacture and sale of assault weapons and high capacity magazines.

–Buy back the assault weapons and high-capacity magazines already in our communities.

–Close other loopholes in the federal background check system.

–Reinstate the Obama/Biden policy to keep guns out of the hands of certain people unable to manage their affairs for mental reasons.

–Close the Fugitive from Justice Loophole created by the Trump Administration.

–Pledged to end the online sale of firearms, ammunition kits and even gun parts.

–Put America on the path to ensuring 100% of firearms sold in America are “smart guns.”

Ban, regulate, buy back, reduce, require, close, stop, etc.  See a pattern here?  Now you know why we’ve titled this program: The War on the 2nd Amendment.  After all, as Jim asked Mike, “How many of these stated agenda items comply with the 2nd Amendment that he pledged to protect and defend?”  Mike’s answer?  None of them comply which you’ll hear him talk about as he briefly tackles the “smart gun” and assault rifle points, the latter of which deals with the Biden lie that such guns are analogous to guns used in the military.

Should this surprise us?  After all, it was President Biden who said after the shooting in Uvalde, Texas, that the 2nd Amendment isn’t absolute.

This is literally a jam-packed program with much more to offer and where listeners also brought their thoughts, both pro and con, into the discussion.  Hear it all on this edition of Crosstalk.