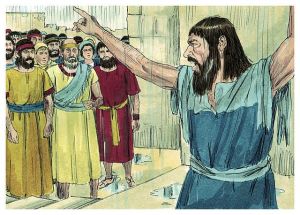 Ezra 10:3 – Is God ordering mass divorce? In today’s culture we are told “love is love” – but Luke 10:27 reminds us the first commandment is to love God, then to love our neighbor. Sometimes following God will cause family division (Matthew 10:35). Joshua had warned the people of the curse following religious intermarriage (Joshua 23:12-13). Ezra is hyper-sensitive to violations of the law – because this is the precedent setting time! Ezra is establishing patterns that will be followed for the next 500 plus years until the destruction of Jerusalem in AD 70. He is afraid that if the people fail at the start – how can the nation continue? Notice also that animals died for this sin (Ezra 10:19).

“First, the wives in the OT were not just “unbelievers” who were “willing” to be “sanctified” by the believing husband (1 Cor. 7:14). They were “pagans,” that is, they were probably Babylonian idol worshipers (cf. Neh. 13:25–26), who were having a pagan influence on their husbands. ” –DefendingInerrancy

“there are heart-breaking temporal consequences associated with wrongdoing, to say nothing of the potential eternal penalty.” ChristianCourier

“the special instructions to divorce non-believers in Ezra 10 must be understood from an exceptional, nationalistic circumstance during a most critical time under Jewish law and should not be looked at as objective moral law especially when considering the totality of the Bible (See: 1 Cor. 7:12ff; 1 Pet. 3:1ff).” KevinPendergrass

1 Corinthians 6:1 – This idea has been a historical part of the American legal system. Other religions adopt similar systems – see Sharia Tribunals, Rabbinical Courts, and Christian Panels. From the Santa Clara Law Review:

At present, in the United States, agreements to arbitrate a dispute before a religious tribunal are generally enforceable in civil courts, as are awards made by religious arbitral tribunals… A Boston town in 1635 laid down an ordinance that no congregation members could litigate unless there had been a prior effort at arbitration.

1 Corinthians 6:7 – Paul says that even though we have a right to “religious arbitration” – are we willing to suffer temporally, because we shall inherit the Kingdom? (1 Corinthians 6:9).

1 Corinthians 6:11 – The encouragement following a list of convicting sins – such were some of you!

1 Corinthians 6:15-16 – Paul might have been thinking about the sins of Ezra’s day just 500 years prior. How can a follower of the LORD unite with someone following another god? Our bodies are not our own (1 Corinthians 6:19).

Proverbs 21:3 – Samuel has stated this before (1 Samuel 15:22). God does not believe that it is better to ask forgiveness than permission.