Yes David had dedicated silver and gold that Solomon placed in the finished Temple (1 Kings 7:51), but just five years after Solomon hands the crown to Rehoboam,

Interestingly even though the treasures are raided seven times – we see that there are vessels of gold that Solomon had made at the time of Nebuchadnezzar (400 years later). Ellicott is surprised as well – assuming there were secret store-chambers, but it is my assumption that the heavy mandatory taxes for the nation/temple were used regularly to rebuild the treasures, according to the descriptions made. Possibly similar to refurbishing state Capitols every 50 years or so, the Levites were continually refabricating the treasures dedicated into the House of the LORD (a continual reminder of the cost of not trusting the LORD!).

1 Chronicles 27:6 – The Chronicler is recording the exploits of the many faithful. Not just the head coach (David), but those in his “starting lineup” (Benaiah)

1 Chronicles 27:7 – But Asahel was slain by Abner (2 Samuel 2:23)? JFB Commentary suggests “This officer having been slain at the very beginning of David’s reign [2Sa 2:23], his name was probably given to this division in honor of his memory, and his son was invested with the command.”

The census which David ordered did not extend to all the Israelites; for to contemplate such an enumeration would have been to attempt an impossibility (Ge 28:14), and besides would have been a daring offense to God. The limitation to a certain age was what had probably quieted David’s conscience as to the lawfulness of the measure, while its expediency was strongly pressed upon his mind by the army arrangements he had in view.

1 Chronicles 27:34 – Wisconsin publishes a similar document – a Blue Book – that contains the biographies and lists of the Governor’s Cabinet, and major officials.

Romans 4:21 – What God promises, He will perform! We can stand on those promises!

Romans 4:24 – The righteousness that was imputed to Abraham can also be imputed to us if we believe in Jesus, taking us from the wrath (Romans 4:15) to peace (Romans 5:1).

Psalm 14:7 – Yes, David himself looked forward to the Salvation that would come, especially knowing that all have gone away, none seek the LORD (Psalm 14:2-3).

Proverbs 19:17 – A lender will look to see the ability of the lendee to repay – the poor have no cosigner but the LORD who will repay your deeds. 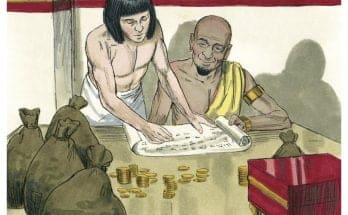 January 19 – Managing resources for a reward 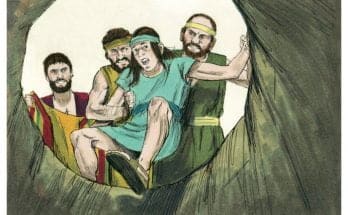 Behold the fowls of the air: for they sow not, neither do they reap, nor gather into barns; yet your heavenly Father feedeth them. Are ye not much better than they?
Matthew 6:26