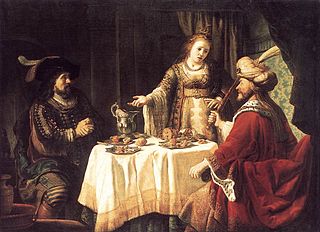 Esther 4:2 – Esther is a legitimate hero, but the account shows she’s a bit naive. When she sees someone with sackcloth, she seems ignorant – she doesn’t ask what’s the matter but offers new clothing. When she hears her people are going to die (Esther 4:8), her initial response is that she’s incapacitated – “I can’t do anything about it” (Esther 4:11).

Esther 4:14 – Without talking about the LORD – Mordecai – the Jew who didn’t return to Jerusalem because he possibly was too influential and partially secularized – still knew that his people would be delivered. Many people today may not recognize the divine protection of the Jewish people (Why are Jews 11,250% as likely to win a Nobel prize?) or why an obscure Canaanite tribe from 3,000 years ago, that was virtually wiped out 2,000 years ago has regrouped as at least the 8th most powerful Nuclear state in the world. Yes people may not ascribe a divine reason to this – but Esther shows us that this is not mere coincidence, but rather divine Providence.

Mordecai’s timeless words to Esther can be turned from a question into a declaration: “Thou art come to the kingdom for such a time as this.”  Has God put you in a place that you can use your title, your time, your talents, or your treasure to advance the Kingdom? Don’t be ignorant or pretend you’re incapacitated – you have been placed where you are, for such a time as this!

Esther 5:3 – The fearful Esther was offered half of the kingdom!

Esther 5:14 – Speaking of Providence – the very day that Haman was going to ask Mordecai to be hanged (Esther 6:4), the king orders Haman to honor (Esther 6:10).

Esther 6:13 – Ah, the wise men figure out that this isn’t going well. But Haman is too committed to back out now. Haman decided to hang in there, and he soon hung (Esther 7:10).

1 Corinthians 12:3 – Paul has to start out with the very basics of discernment!

1 Corinthians 12:18 – Contentment – God may not have given you the preaching ability, the deepness in prayer, the quick wisdom, the capacity to gift millions, the ability to do works for God that everyone will sit up and take note of.

When I consider how my light is spent,
Ere half my days, in this dark world and wide,
And that one Talent which is death to hide
Lodged with me useless, though my Soul more bent
To serve therewith my Maker, and present
My true account, lest he returning chide;
“Doth God exact day-labour, light denied?”
I fondly ask. But patience, to prevent
That murmur, soon replies, “God doth not need
Either man’s work or his own gifts; who best
Bear his mild yoke, they serve him best. His state
Is Kingly. Thousands at his bidding speed
And post o’er Land and Ocean without rest:
They also serve who only stand and wait.”

Proverbs 21:21 – We just read about Mercy & Righteousness – how they lead to the fountain of life (Whose fountain is it?)