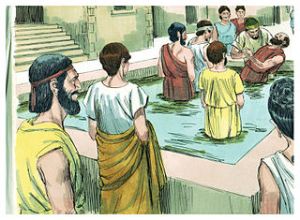 2 Kings 10:32 – Here we see God’s judgment on Jehu, and the monument we talked about yesterday is a permanent record of his disobedience.

2 Kings 11:18 – The Queen that brought in Baal worship tried to accuse the people of Treason (2 Kings 11:14), and only then entered into the house of the LORD (2 Kings 11:13). Apparently it had been so abandoned that it was the staging ground for the revolution.

The object of this chest was to make a separation between the money to be raised for the building from the other moneys destined for the general use of the priests, in the hope that the people would be more liberal in their contributions when it was known that their offerings would be devoted to the special purpose of making the necessary repairs. The duty of attending to this work was no longer to devolve on the priests, but to be undertaken by the king.

2 Kings 12:18 – Interesting the people who try to bribe their way into success – when we could just follow God completely (2 Kings 12:3). But as we are aware, the problem with pragmatism is that it often works!

Acts 18:9 – Ever notice how often God has to tell us to Be not afraid?

Acts 18:14 – Sometimes God defends us before we can defend ourselves!

Proverbs 18:1 – Many of the commentaries note that this is a hard Hebrew phrase to translate. They note that the desire is the driving force for good or for bad.