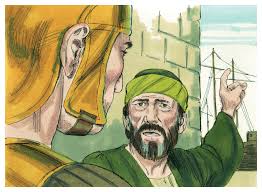 I Chronicles 8:33 – And we discovered another familiar name – Saul, the son of Kish. We found his four sons led by Jonathan. We see that Jonathan’s line extended fourteen generations to 150 people. Even though Jonathan’s father had abandoned the faith, Jonathan’s descendants were known as “mighty men of valour” (1 Chronicles 8:40). If each generation was 30 years, 14 generations stretches to 420 years. Going from 1010 BC forward 420 years takes us to 590 BC or roughly the fall of the Southern Kingdom (586 BC). While the Southern Kingdom saw even the family line of David fall into despair, Jonathan still had descendants of valour at the end of the Judaean Kingdom.

Acts 27:6 -Why are obscure details like this in the inspired Word of God? Because it is a historic document containing the actual historic record of Paul’s journeys.

Acts 27:11 – This verse gives a good insight into free will and persuasion. Debates about free will center on man’s decisional ability. Here we see that this decision was rooted in who the centurion believed more. Even though Paul would be verified (Acts 27:20), and it seemed to be general sailing knowledge (Acts 27:9), Paul’s message was unpersuasive because of the perceived “ethos” of the ship owner. Surely the ship owner had better knowledge of the sea than some renegade tentmaker. Also the “creature comforts” appealed to the centurion (Acts 27:12). The centurion made a reasonable decision for someone who only considered the “natural” facts. But when one adds the fact that Paul was not a mere tentmaker, but the mouthpiece of the Creator of seas, his credibility would surpass that of even the ship’s owner. This issue today arises – do we go for a respected theological scholar at an Ivy League school who questions the authority of Scripture – or do we go with the Scripture because its author is the Creator of the land those Ivy League schools are built upon?

Psalm 7:1 – And speaking of who we believe and trust – the Psalmist declares that he has put his trust in the LORD. The Psalmist knows he faces immediate danger like Paul (Psalm 7:2), and that only the LORD can deliver him. Yes salvation is of the LORD (Psalm 7:10).

Proverbs 18:22 – As I write this note, I’m on my honeymoon with my beautiful bride and thankful for this “good thing” and have been in need of this “favour of the LORD!” William Jennings Bryan used this verse to his soon-to-be wife’s father as reasons why he should consent to their marriage. Bryan’s father-in-law retorted that Paul said it was good for those that were single to remain single. Bryan retorted that Solomon had been single and married so it was better to take his advice over Paul’s.