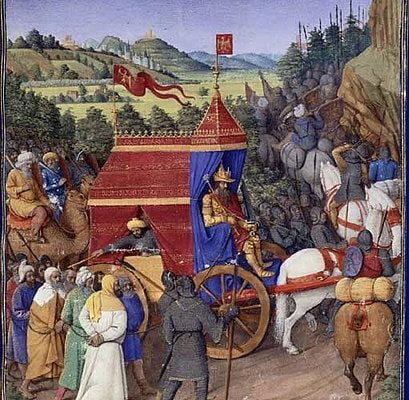 2 Chronicles 19:2 – Yesterday we pointed out Jehoshaphat’s compromise, and today he is rebuked for it. Yes good people can do much good (2 Chronicles 19:7), but by their alliances “help the ungodly.” Dr. Peter Masters, pastor of Spurgeon’s Metropolitan Tabernacle talks about the sad state of those who are personally faithful yet partner with the ungodly, especially because like Jehu, we cannot gloss over that partnership. The good news is that Jehoshaphat seemed to hear the seer in that he warns the Levites to warn the people about the wrath (2 Chronicles 19:10) that he was warned about (2 Chronicles 19:2). But we read that while he heard the seer he didn’t follow the seer, for he didn’t just partner with Ahab, but with Ahab’s wicked son Ahaziah (2 Chronicles 20:35). Again the prophets warned him that God was judging him for an unholy alliance (2 Chronicles 20:37).

2 Chronicles 20:21 – How do you know the people really believed? They sent singers out “before the army.” That’s faith to go out armed with nothing but your vocal cords!

2 Chronicles 20:33 – The story of Jehoshaphat. Personally righteous, able to move the people to fear the LORD, but his desire for “unity” with the Northern Kingdom and his tolerance of the high places were the black marks on his impressive resume of a king following God. Today many ministers are doing a great work for God, but they are allying themselves with those hostile to God. We must be willing to put faithfulness to God above “unity at any cost.”

Romans 10:14 – Yesterday we read how salvation comes to those who believe in Jesus – and that is done by calling on His name. Yet Paul backs up the logic change – God is sending preachers with beautiful feet (Romans 10:15) with the word of God (Romans 10:17), and we are called to go as well!

Romans 11:12 – God isn’t finished with the Israelites yet! Thru their diminishing the Gentiles experience the riches of the Gospel, yet thru their fulness – the world will be blessed even more.

Psalm 21:13 – Speaking of singing, join with the Ambassador Staff Quartet as they sing Be Thou Exalted!

Proverbs 20:6 – Phil Cooke tells of the challenge of finding faithful men (and women):

For instance, in many cases, I’ve had media people here in Hollywood tell me they’ve worked for “Fox” – with the inference that it means Fox Film Studios, or Fox Television. But with a closer look, I discovered they’d been an assistant at a local Fox TV station in a small town in the Midwest.

In another situation I had a client excitedly hire a producer from a famous church’s TV ministry, thinking that if they worked for that famous church, she had to be amazing. But I decided to make a few calls, and discovered she had actually been fired from the church, and they were adamant they would never hire her again.