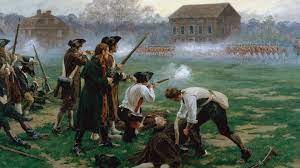 It’s April 19, 1775. I’m at the Concord Green with militia leader Colonel Barrett. News of the Lexington battle has reached Concord.

JG: “Colonel Barrett, can your minutemen take on the most powerful army in the world?”

JB: “John, we must and we will. We’ve just won the first round with our minutemen. We stopped the British troops at Concord and harassed those bloodybacks all the way to Boston. This was indeed a great victory and a devastating defeat for the redcoats.”

The minutemen’s bravery at Concord stirred hope in every colony in America, giving them courage to continue the fight for their freedom.

Today, tourists can still visit the Col. James Barrett Farm in Concord, Massachusetts. A plaque there reads, “House and farm of Colonel James Barrett, commanding officer of the Middlesex Militia. On the morning of April 19, 1775, the British march from Boston, which resulted in the outbreak of the Revolutionary War, ended here with a search for military stores. Gun carriages, found by the light infantry, were burned in front of the house. Other weapons and supplies were successfully concealed in the attic of the house, in furrows plowed near the farmyard, and in spruce hollow behind the house.”