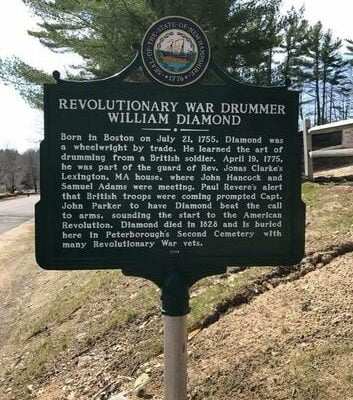 It’s April 20, 1775. I’m in Lexington, Massachusetts, at the home of Billy Diamond, drummer boy for the Lexington minutemen.

JG: “Are you happy Billy is home safe?”

AD: “Oh, yes, I was so scared. Billy says his drum helps soldiers to fight harder. I help clean my brother’s drum so he’s ready to fight, too.”

A historical marker for “Revolutionary War Drummer William Diamond” reads, “Born in Boston on July 21, 1755. Diamond was a wheelwright by trade. He learned the art of drumming from a British soldier. April 19, 1755, he was part of the guard of Rev. Jonas Clarke’s Lexington, MA, house where John Hancock and Samuel Adams were meeting. Paul Revere’s alert that British troops were coming prompted Capt. John Parker to have Diamond beat the call to arms, sounding the start to the American Revolution. Diamond died in 1828 and is buried here in Peterborough’s Second Cemetery with many Revolutionary War vets.”