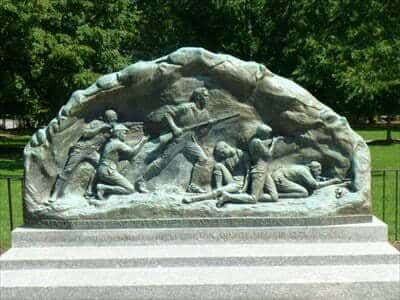 JG: “Billy, you were very brave to march into battle yesterday against the British army.”

BD: “Thank you, Mr. Gillespie, but I wasn’t brave. I’m called to fight for freedom. I can do no other. John Harrington… now, he was a brave man. He was hit in the chest by a musket ball. He crawled to the steps of his house where he died at the feet of his wife and his eight-year-old son.”

Eight fathers with twelve teenage sons at their sides fought in that battle at Lexington and eight Americans died.

An inscription on the Memorial to the Lexington Minutemen reads, “These men gave everything dear in life, yea, and life itself in support of the common cause.”