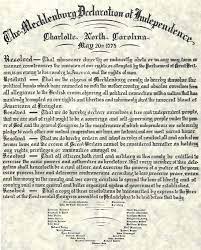 It’s May 10, 1775, over a year before the Declaration of Independence. A dedicated group of Scotch-Irish Presbyterians met as delegates of Mecklenburg County, North Carolina. Many of them were preachers. Here’s what they declared:

“Be it resolved that we do hereby declare ourselves a free and independent people, that we are and of right ought to be a sovereign and self-governing association under the control of no power other than that of our God and the general government of the Congress.”

Ideas of freedom under God came not only from the pen of Thomas Jefferson, but from throughout the colonies as well.

Read the full text of The Mecklenburg Declaration of Independence.