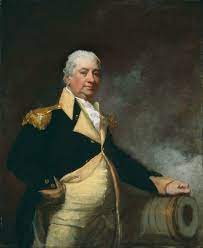 JG: “General Knox, what are you doing way up here in northern New York?”

HK: “Mr. Gillespie, it will be difficult, but we desperately need to get these fifty-nine cannons to Massachusetts for General Washington and the Continental Army.”

On the General Henry Knox Trail in Westfield, Massachusetts, a historical marker reads, “Through this place passed General Henry Knox, in the Winter of 1775-1776, to deliver to General George Washington at Cambridge the Train of Artillery from Fort Ticonderoga, used to force the British Army to evacuate Boston.”