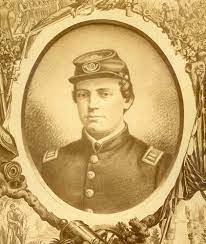 JG: “Joseph, why are you pulling down the statue of King George III?”

JM: “Mr. Gillespie, not only are we tearing down a symbol of tyranny, but the 4,000 pounds of lead in the statue can be converted into musket balls. The king’s men will soon feel the effect of this melted majesty fired at them.”

Not only did Joseph Martin and the New Yorkers tear down a statue of a tyrant, but they continued the fight to tear down the oppression of tyranny in America, to create a new nation of liberty, as well.

In New York, New York, a plaque on the Bowling Green fence reads, “Erected by the Common Council in 1771, this fence surrounds New York’s earliest park. The park was leased in 1733 for use as a bowling green at a rental of one peppercorn a year. Patriots, who in 1776 destroyed an equestrian statue of George III which stood here, are said to have removed the crowns which capped the fence posts but the fence itself remains.”