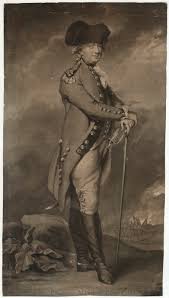 It’s July 27, 1776. I’m in London, England, with Lord Charles Cornwallis who has just been ordered to America by the king.

JG: “Lord Cornwallis, congratulations on your promotion by the king!”

CC: “Like Edmund Burke, a member of parliament, I disagree with the king’s opinion on this war, but I’ve been called to fight America and I will serve my king.”

Lord Cornwallis was one of the most capable British generals of the American Revolution, eventually losing to General Washington at the 1781 Battle of Yorktown.

In Isle of Palms, South Carolina, the Lord Charles Cornwallis historical marker reads, “Major General Charles Cornwallis established a brigade headquarters not far from this site on or around June 19, 1776. His brigade was part of a British army under the command of Sir Henry Clinton, which had occupied this island as a staging point for attacking the palmetto log fort on Sullivan’s Island. This was Cornwallis’ first major command in America.

“Cornwallis’ troops were prevented from crossing Breach Inlet on June 28, 1776, by the fire of S. C. Rangers on the opposite shore. The British were defeated and sailed for New York. Cornwallis returned in 1780 as second in command of the army that captured Charles Town. Left in command of the south, he finally surrendered at Yorktown on October 19, 1781.”