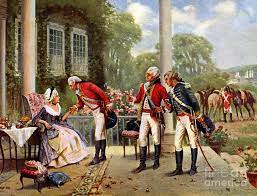 JG: “Mrs. Murray, last week General Washington was your guest. How is it on the following day you received the British generals Howe, Cornwallis, and Clinton?”

MM: “Mr. Gillespie, I had a plan. I knew General Washington needed precious time so I fed the British generals the finest meal, the finest wine, and I flattered and flirted the silly Red Coats into singing and dancing for hours, just long enough for General Washington and his Continentals to slip away.”

Read more about the incident in the words of James Thatcher, a surgeon who was traveling with General Washington’s army.