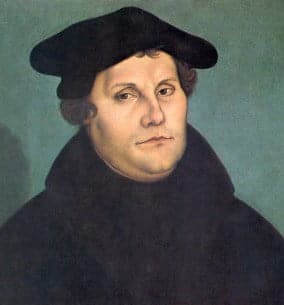 Martin Luther was a man used by God to bring the truth of justification by faith to the world. In seminary, one of the exam questions asked if the Reformation would have happened without Martin Luther. The more I thought about it, the more I realized while there may have been a Reformation, it would have looked totally different. Not just because of Luther, but because of the providential arrangement of circumstances. Wycliffe was burned posthumously. Tyndale was burned at the stake. Hus and Savanarola as well. Luther might have as well – except for Frederick III. Frederick III had one of the largest collections of relics in the world – over 19,000 items able to reduce time in Purgatory by almost 2 million years – and yet risked it all to protect a man who would reject the very idea of Purgatory.

Near the end of Luther’s life, a long-time friend Peter the Barber asked Dr. Luther for advice on how to pray. A drunken Peter tried to disprove his son-in-law’s boast of invincibility, and ended up killing him. Thru Luther’s lobbying, Peter was exiled instead of executed, and lived in constant despair over his foolish actions. Peter asked for help from Dr. Luther, and in particular, how to pray. This is excerpted from the Northwestern Publishing House edition.

First of all, when I realize that because of other duties or thoughts I have grown cold and neglectful when it comes to praying (for our flesh and the devil resist and hinder prayer), I take my little hymnal and hurry to my room.

Let the word of Christ dwell in you richly in all wisdom; teaching and admonishing one another in psalms and hymns and spiritual songs, singing with grace in your hearts to the Lord.

Behold the fowls of the air: for they sow not, neither do they reap, nor gather into barns; yet your heavenly Father feedeth them. Are ye not much better than they?
Matthew 6:26