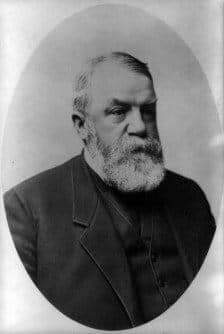 Those who have left the deepest impression on this sin-cursed earth have been men and women of prayer. You will find that prayer has been the mighty power that has moved not only God, but man.

Abraham was a man of prayer, and angels came down from heaven to converse with him. Jacob’s prayer was answered in the wonderful interview at Peniel, that resulted in his having such a mighty blessing, and in softening the heart of his brother Esau; the child Samuel was given in answer to Hannah’s prayer; Elijah’s prayer closed up the heavens for three years and six months, and he prayed again and the heavens gave rain.

The Apostle James tells us that the prophet Elijah was a man “subject to like passions as we are.” I am thankful that those men and women who were so mighty in prayer were just like ourselves. We are apt to think that those prophets and mighty men and women of old time were different from what we are. To be sure they lived in a much darker age, but they were of like passions with ourselves.

We read that on another occasion Elijah brought down fire on Mount Oarmel. The prophets of Baal cried long and loud, but no answer came. The God of Elijah heard and answered his prayer. Let us remember that the God of Elijah still lives. The prophet was translated and went up to heaven, but his God still lives, and we have the same access to Him that Elijah had. We have the same warrant to go to God and ask the fire from heaven to come down and consume our lusts and passions—to burn up our dross, and let Christ shine through us.

Elisha prayed, and life came back to a dead child. Many of our children are dead in trespasses and sins. Let us do as Elisha did; let us entreat God to raise them up in answer to our prayers.

Manasseh, the king, was a wicked man, and had done everything he could against the God of his father; yet in Babylon, when he cried to God, his cry was heard, and he was taken out of prison and put on the throne at Jerusalem. Surely if God gave heed to the prayer of wicked Manasseh, He will hear ours in the time of our distress. Is not this a time of distress with a great number of our fellow-men? Are there not many among us whose hearts are burdened? As we go to the throne of grace, let us remember that GOD ANSWERS PRAYER.