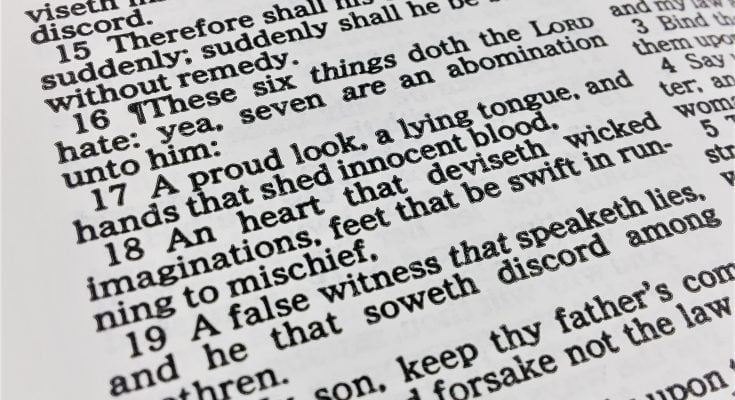 Often one focuses on the love of God, and rightly so; for God indeed is a God of love!  It is because of His love that He sent His only begotten Son to this world to pay the debt of sin incurred by mankind. (John 3:16) One will find numerous verses throughout Scripture pointing to the love of God.

But did you know God also hates?  You may wonder how God could be a God of love and a God of hate at the same time.  Parents will readily identify with loving their children but will hate the wrong that they do.  Scriptures tells us to love the good and hate the evil.  We are told in Ecclesiastes 3:8 that there is “a time to love, and a time to hate.”

While Scripture in many places addresses things to hate, for purposes of this article we will focus primarily on a list of what God hates as referenced in Proverbs 6:16-19.

“These six things doth the LORD hate: yea, seven are an abomination unto him:  A proud look, a lying tongue, and hands that shed innocent blood, An heart that deviseth wicked imaginations, feet that be swift in running to mischief, A false witness that speaketh lies, and he that soweth discord among brethren.”

God hates a proud look.  The very first overt act of sin was pride as Lucifer proclaimed “I will be like the most High.” (Isaiah 14:13-14) This pride lies in the very heart of man.  Pride lifts self and puts down others.  This happens in the home, in the business world, and sadly in Christian circles.  Throughout Scripture it is evident how God’s hatred of pride brought down those who were embroiled in it.  Men such as Pharaoh, Haman, Nebuchadnezzar, Belshazzar and others learned the hard way that God hates pride.

Sadly, for some reason pride has become an overlooked sin in the church.  It is often excused as not being as serious as something else, but you will notice it is first on God’s list.

God hates a lying tongue.  Our world is filled with lies and deception.  We are surrounded daily by “fake news.”  The philosophy of some is to get ahead by any means necessary and utilize lying as a means to an end.  God not only hates lying, but it is an abomination to Him.  “Lying lips are abomination to the LORD: but they that deal truly are his delight.” (Proverbs 12:22)

But it is not just the media involved in lying.  Many a Christian has also adapted lying as a way of life excusing it by saying “everyone does it.”  It doesn’t matter if you’re lying to your spouse, your children, your clients or your boss.  God hates it.  May our prayer be like the psalmist who wrote, “Deliver my soul, O LORD, from lying lips, and from a deceitful tongue.” (Psalm 120:2)

God hates hands that shed innocent blood.  The blood of the innocent call out today as over 62 million children have been killed by the hands of the abortionist since Roe v. Wade. And it comes with the sanction of the courts and with legislative bodies, and with the people of the nation.  Are we standing for life?  Is it reflected through our actions?

God hates a heart that devises wicked imaginations.  We do not need to look past this current year to see how wicked man is and the very heinous acts that are being committed.  We are following a cycle we have seen played out previously.  “And God saw that the wickedness of man was great in the earth, and that every imagination of the thoughts of his heart was only evil continually.” (Genesis 6:5) Just as God brought judgement with a world-wide flood, there is yet another judgement awaiting those who reject God.

Indeed, in cities across the nation man is doing that which is right in his own eyes.  The riots, the destruction, the mayhem are based on evil. The heinous acts being committed are atrocious and God hates them!

God hates feet that are swift in running to mischief.  Our feet will take us to carry out the wicked imaginations of the heart.  It is with good reason Scripture says, “Ponder the path of thy feet, and let all thy ways be established.” (Proverbs 4:26) Our feet are designed to take us to promote the Gospel when instead we devote them to carry out evil deeds and purposes.

God hates a false witness.  How many false hate crimes have been discovered in recent years?  How many will give false information at the polls or with mail in-ballots to accomplish evil deeds?  How many will file a false report in order to “advance” in society?  A stark warning is provided, “A false witness shall not be unpunished, and he that speaketh lies shall not escape.”  (Proverbs 19:5) One day such a person will reap what they sow.

God hates the one that soweth discord among the brethren.  Not only is this sin evidenced in society, but this one often takes root in the church.  Many a division occurs as lips begin to flap.  The Apostle Paul warned about those who “learn to be idle, wandering about from house to house; (can I inject, phone call to phone call, text message to text message, social media post to social media post) and not only idle, but tattlers also and busybodies, speaking things which they ought not.” (I Timothy 5:13) If God hates these things, then should not we also hate them as well?  Should we not despise the very things God despises?  Then why do we find many of these acceptable and practiced in our home, in our business and in the church?  Examine yourself.  Make the necessary course correction.  Commit to hating the very things God hates!